It has taken several years but I guess I am finally coming around.

Heck, there was a time that I wanted nothing to do with any phone that had a low grade point and shoot crappy camera in it.  In fact, on one occasion I approached a salesman, at one of the bigger cell phone centers, and said "I need a new phone and All I want is a PHONE !  without a stupid camera in it!!"  at which point the sales guy informed me that no one made a phone without a camera, so........... "What make and model are you interested in?".  That was 10 years ago.

Well, about a year ago I slowly began to change my tune.  Now, it didn't happen overnight.  The first seed was planted way back in 2008 when I had a brief (three month) encounter with an iPhone and I actually liked it for all the business stuff it could do.   You know, like quickly joining several people on conference calls, forwarding messages and calls etc. etc. 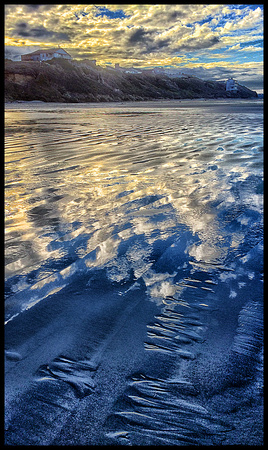 It started slowly.  I made the move from my Droid to the new (at the time) iPhone 5s.  It took me a while to figure it out before I began to feel somewhat productive.  But taking pictures with it still was not on my "gotta do" list.

Then one day I found myself on the Southern Oregon Coast and in the Redwoods.  While playing around with the camera/phone (or is it a phone/camera???, I'm still not to sure about that one.)  Any how,  I discovered there was a Panorama feature built into the phone camera and I was intrigued.  I found it to be pretty intuitive and since I have a fair amount of panorama photo experience I started messing around with it.  And,  I loved it !! It allowed me to show scenes in a way that most people hadn't seen before and every time I showed someone my Redwood Tree (image on the left) everyone wanted to know "How did you do that??"

So lets fast forward a couple of months.  Early one morning I am doing my beach walk, in one heck of a wind storm. We had an East wind coming off the Bay and across the beach and out to sea.  It was blowing around 40mph with occasional gusts in the high 60's.  That isn't too uncommon for us in the Winter but it does make it hard to keep your footing.

On this particular morning there was a lot of real estate changing places. The entire beach was a moving mass of sand from the ground up about 6 to 10 inches.  I started a little before sunrise and as the sun began to shine across the beach it was beautiful.  I remember thinking .... gee, I wish I would have brought my camera.  I walked about another 10 feet and thought..... Wait a minute, I've got my phone with me, let's see what it can do?

I had recently downloaded an App called vividHDR     http://ittiam.com/vividhdr/ that would allow me to take a four shot, bracketed series of exposures of a given scene. 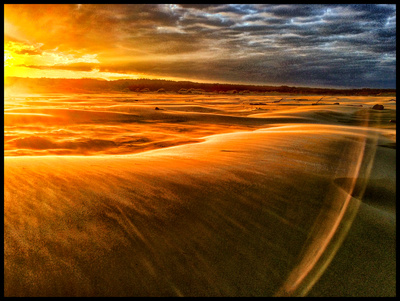 Then it internally processes the files for you and presents a pretty good HDR image with a lot more detail than possible with virtually any single shot.  It also gives you some editing options so you can mess with the contrast, saturation and details.  (The images to the right-above & immediate right are two such images). Blue Sand Reflections and Sunrise Sand Storm were 4 shot HDR bracketed captures and they both ended up looking almost exactly like what I was seeing with my naked eye.  The Blue Sand Reflections image was shot during that blue light phase of early morning light.  The Sunrise Sand Storm of the blowing sand with the blazing sunrise are good examples of images that required minimal adjustments on my part.  Oh, yeah.  It also allows you to keep the original capture as well so you can undo the process if you don't like the merged capture.  I have to admit that the utilization of the vividHDR App has completely changed my desires and opinion on the value of always having a camera in your pocket.

I now find myself planning my walks and excursions at times of the day that might provide me with the best light for what ever comes up while wandering  the beaches.

This image below (Sand Trees) .... is a great example of an image that absolutely would have been missed were it not for having a small, nimble camera available when I least expected a need. 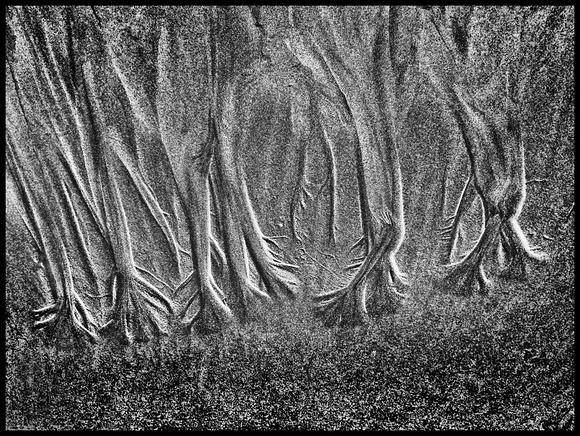 SAND TREES ON THE BEACH IN NEWPORT OREGONWater patterns in the sand on the beach at Newport, Oregon

I was walking along the surf line with my wife when I looked down at the patterns created by the flowing waters on the sand.  The tide had just gone out and the beach was pretty saturated. When I saw this subject I stopped immediately. It looked good to my eye and even better on the screen of the camera/phone.

What caught my attention was (at least to my eye) a forest of unusual trees. I photographed the scene from several perspectives and loved what I was seeing on the screen.  The highlights and shadows were created simply from the reflective surfaces of the wet sand and a thin veil of clouds that softened the sunlight striking the scene.

Now for the really good part.  The image before you is exactly as it was when I shot it.  However, it is not specifically what I saw, nor what caused me to spend the time to photograph it.  Only after I returned to my studio and opened the images on my computer did I actually see this specific image.  You see..... what I saw on the beach was an upside down version of this scene.  What looks like roots and the bases of the trees in this image I had seen them as the top mantle of the trees in the original viewing.  If you can rotate your monitor 180 degrees you can see what drew me to the scene to begin with.  The water had actually flowed (in my finished image) from bottom to top. I am particularly taken with the essence of depth portrayed in this image as it feels like one could actually walk into this scene and get lost in the forest beyond.

So, The question of the day is ......... are the iPhone photo files large enough to be able to do anything with them???  Can I make a 16x20 Fine Art Print from such a small camera??  You've got to know I asked myself the same questions, over and over.  I finally buckled down and ran a quick test on the image below of the (Heceta Head Lighthouse) which is not very far from Cape Perpetua, here on the Central Oregon Coast.  The file, right out of the camera/phone is a 57.8MP file.  This is a 160 degrees panorama image that will produce a 8"x29" print at 300dpi.  I did a test print of the image and increased the output to double the base file for a pano print 16" x 58" and it was very good.  If I were to print this image, that size, on a high quality canvas *(like Breathing Colors Silverada) it would expect it to sell quickly in any coastal gallery.

Needless to say, after so many years of turning my nose up at all those phone photographers I only have two things to say......    Thanks for paving the way.   And,  I HAVE SEEN THE LIGHT !!

Thank you for visiting my BLOG

Please feel free to share your comments or questions