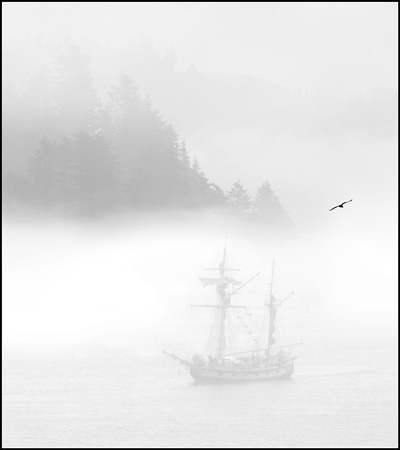 “HAWAIIAN CHIEFTAIN”, the GHOST SHIP silently slips through the fog in Yaquina Bay. Each month I publish an Image of the Month with the intent of providing behind the scenes information with insight into the tricks of the trade and full disclosure on how the image was captured and created.
* * *
On a cold foggy morning I took a hike around a distant headland to see what was on the other side. As I came out of the underbrush and trees I thought I saw, before me, the aberration of an ancient tall ship drifting through time and space. I blinked a couple of times and it was gone. I began to question whether I had actually seen it or if I was just imagining it, when moments later, it rematerialized followed shortly by the distant trees and shore line which, visually, anchored the scene and it all began to make sense. I wasn’t dreaming or seeing ghosts!, I was seeing one of mother natures unique moments where her drifting fog banks hid the treasures of the scene and only occasionally displayed just enough to make visual sense.

Once I regained my balance I captured a number of images of the tall ship, some with too much detail, as the fog parted, and others where there wasn’t enough to even tell it was a sea going vessel. However, one image was just right. A little like the old “dash of salt” parable, “Not too much, and not too little”.

Photographing the old Tall Ship really didn’t take more than 10 or 15 minutes but I lingered as a silent observer watching her slip into and out of fog bank after fog bank until in the end she quietly dissolved into the surrounding landscape of white and grey and seemed to simply disappear.

Several days later I settled in to edit my images from this memorable moment and quickly choose the one image that best told the story and portrayed my pleasant memory of that unique experience.

In Photoshop I did a RAW conversion paying attention to make sure my white points in the image (and there were a lot of them) were within the traditional 255 white value so common in managing PS files. Add an appropriate crop and make sure all of the traditional aspects of tonality, sharpness, levels and curve adjustments are right on and you would think the image would be ready to go to the printer. Right?.

Well, it just felt like something was missing. I loved the overall scene, the tonality, the composition and the way the tall ship seemed to drift along in front of the distant landscape. But something was needed to truly bring the entire scene to life.

I felt like it needed an observer. Maybe a representation of someone or thing watching over this elusive traveler. It shouldn’t be real obvious, or demand too much attention but I felt something was needed to complete the overall scene’s compositional flow. It needed a lone seagull. A perverberal Johnathan Livingston kind of completion.

I didn’t have to go any further than the fence at the edge of my backyard, which looks down over Newport’s Yaquina Bay. Seagulls are always soaring over and around the bay so all I had to do was get my Nikon 200mm f-2.8 lens, put my 2x extender on for a total of 400mm and fire away. After about a hundred images I was ready to download the seagull files and make the final selection for inclusion in my Ghost Ship image.

I wanted the seagull to be the darkest and most contrasty component of the entire image so, once the gull image was selected it was easy to do a levels adjustment of the gull with a black point of (0) zero. I then brought the gull image up on my PS screen at 300% and carefully did a selection around the gull so I could cut and paste the gull into the scene. *( I was careful to re-size the gull to the appropriate proportions to fit the overall scene, and it was necessary to flip the orientation 180 degrees so that the gull was making a turn to the left, rather than to the right as originally captured.)

Why did I place the gull in that specific location? Well, I guess that part just comes from years of experience in knowing where something should be, based on a gut feeling. I brought the gull into the scene and with the wonders of PS was able to move it all over the background layer (the landscape, fog and ship) until I found that perfect spot where it simply felt right. Building a final image certainly has a lot to do with Composition, some with Flow and a lot to do with How It Feels.

There is something serene about Ghost Ship. She seems to float in a shroud of fog with a hint of the shoreline to ground the image and the lone gull circling overhead keeping a watchful eye on those below.

Customers and collectors that have purchased Ghost Ship have, almost to a person, expressed their pleasure with the piece because of the MOOD it portrayed to them. In this image it really is all about The Mood and, The Light.
* * *

The two tall ships reside at the Grays Harbor Historical Seaport in Aberdeen, Washington. And are the focus of a nautical educational organization. Both ships are scheduled to be in Newport, Oregon beginning on or about (depending on winds and tides) May 16th. and will be on display for about 10 days.

Paulette (my wife) and I have booked passage on May 15th for the sail from Coos Bay to Newport. An approximate 25 hour trip.

You might find some informative and fun reading with this Historical Seaport link:
HISTORIC SEAPORT - LADY WASHINGTON & HAWAIIAN CHIEFTAIN
And,
“Ghost Ship” was featured on the Historical Seaport BLOG publication on Jan 21st. Click on this link for a sneak peak:
HISTORIC SEAPORT - BLOG - GHOST SHIP
I would love to hear what you think of GHOST SHIP ?
© Vern Bartley Photography
User Agreement
Cancel
Continue