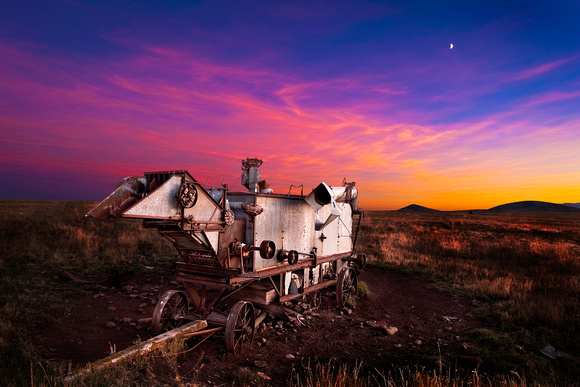 APRIL 2011 IMAGE OF THE MONTH - ABANDONED ON THE ZUMWALT

An antique thrasher found abandoned on the Zumwalt Prairie National Grasslands in NE Oregon provided the perfect backdrop for a great sunset image. The Zumwalt is the largest natural grasslands of it's kind in North America at approximately 55 sq. miles. There are few roads in the grasslands and even fewer buildings, but with a little effort a few signs of the distant past can be found to fulfill a photographers search for that special image.

APRIL 2011 - IMAGE OF THE MONTH OVERVIEW
The Zumwalt Prairie rests between the little, picturesque town of Enterprise in NE Oregon and goes up north to the Washington state border.

While on a photo excursion with my wife we took an entire day and drove the 150 mile loop road that transects the Zumwalt from north to south. Virtually, all of the trip was on dirt or gravel roads and it seemed to go on forever with limitless vistas, rolling hills, forests and virgin prairie lands and yes, grass everywhere.

We left Enterprise early in the morning prepared to spend the day as needed. After about 8 hours of driving and shooting we knew we were nearing the end of our trip. There had been lots to see, lots to shoot and lots of surprises around every turn in the road. But, I really hadn't seen that really special place with a view or subject that could really make my sox go up and down. As we were nearing sundown we were topping out on hill after hill with vistas all the way to the Idaho side of the Hells Canyon area and the mountains that lay beyond. As we came up out of a shallow draw, nearing another small summit a little something caught my eye just barely sticking up over the horizon off to the west of our southerly route of travel. The sun was about 30 minutes from setting, the moon was already up (no...... I didn't add the moon. It was right where you see it in the image.) and I could tell the whole area had all the markers of a great twilight sunset.

I parked the jeep on the side of the road, climbed over a 4 strand barb wire fence and headed for the crown of the little hill to see what that thing was that caught my eye only moments before. After about a 50 yard gradual climb I was presented with this antique thrasher out in the middle of the prairie with the sun slowly setting off to the west. Not only was the thrasher resting in its permanent residence but keeping it company, just 30 yards away, was the skeletal remains of a 1930's vintage sedan. The old buggy had come to its final resting place slowly sinking into natures womb. No tires, no windows and whatever chrome there might have been was clearly a thing of the past. It seemed both the thrasher and the old cars only real purpose today was to serve as a scratching post for the occasional range cow or varmint that happened along.

It only took a moment to realize "This was what I had been looking for all day !!" Not only was the scene ideal but the growing brilliance of natures palete was soon to be at full bloom. I hurried back to the jeep, gathered up my equipment, back over the barb wire fence for the third time and to the top of the hill. I knew the thrasher was the real treasure so I started with the old car. After all the light was only going to get better and better. After about 15 minutes with the weathered old car I tackled the real treasure of the evening.

The sun began to set about 5 minutes after I was all set up, so the shoot began. I shot a number of images with the last rays of sun on the thrasher and then took a few minutes and simply stood and watched as the evening began to envelop the scene. The longer I waited the better and better it got, as the wispy clouds began to strut their stuff. About 40 minutes after the sun had fully set it felt like the scene was at its peak.

There was only one way I was going to pull this one off...........HDR.
I set my camera on aperture priority using my lens sweet spot for maximum sharpness of f-11. I metered the high lights in the clouds and the shadows below the thrasher and picked a mid way point between the two. I then set my camera to rapid fire sequence and set my bracketed exposure setting to capture 7 frames. One right smack in the middle with three progressively over and under stops and shot a sequence in that matter about every 3 or 4 minutes as the light values slowly changed and faded into darkness. The total shoot took about an hour and I ended up with a total of 270 frames for all my efforts.

As I headed back to the fence and the jeep I felt a high degree of satisfaction in knowing I had stumbled onto something few have or would of stopped to investigate. It felt like sometimes everything comes together for a reason. The subject, the light, the sunset and even the moon..............who could have asked for more?

The post processing was actually much simpler that one might imagine. I chose to select the set of bracketed images that gave me the best tonalities in the overall scene. Once I had that nailed down I used three of the bracketed shots and did a raw conversion of each individually paying specific attention to only that part of each of the three that was to be utilized for its part of the whole image. ie: (One bracketed image was processed minimally in the RAW converter just for the clouds, sky and moon). Nothing else on that image really mattered. I would use the second file specifically for the tonality and detail captured of the thrasher itself and the final image (#3) was processed specifically for the landscape, ground and hills.

With three working files for the three main components of the image I began the manual, layer masking process of utilizing the best of each of the three to create an image that very closely matched what I had seen while taking the photographs. My goal was to make ..." It is exactly as I saw it !"

Now for the last part. "Was it photoshopped ???
Well of course it was.
Just like when I used to work in a wet darkroom. Every image I created in that little room was dodged, burned in, bleached, and or compensated in one way or another. You know I actually had the audacity to use a red filter on my camera once. How dare he, some might have asked. It is strange that in almost 40 years of working in the darkroom and producing literally thousands of images, over the years I never once got asked. " Hey Vern. Was this picture darkroomed?"

I hope this image and the info associated with it brings some small value to you and your photography.....Thanks for your endurance...........Vern
[email protected]
User Agreement
Cancel
Continue