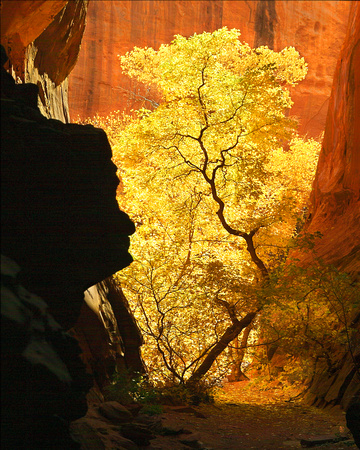 This was the caption I originally wrote about this Cottonwood Tree and the Indian Silhouette that framed the scene.: An old Indian silhouette gazes out at an old cottonwood tree with brilliant Fall colors. Scene was discovered on the Burr Trail in Southern Utah in early November.

What the caption did not tell was the journey of awareness and learning the art of seeing, rather than simply looking.

I came across this scene in early Nov while traveling down the Burr Trail in South Central Utah. It is at a place called Long Canyon and the site rests only 300 feet off the road. I arrived at this location mid morning and the road and canyon was in full morning sunlight. The tree caught my eye so I stopped and went for a little hike to see if it was worth getting my camera gear out. So, off the road, down the creek bank, across the dry creek bed and up to the tree. Imagine my surprise when I discovered there was a little trail that went under this old Cottonwood and back in a very narrow but deep slot canyon. I hiked about another 300 feet into the slot until it narrowed down to a point that it was impassable. When I turned around to see how it looked toward the entrance to the little slot I was shocked to see the entire Cottonwood fully backlit with an old gnarly, twisted trunk reaching for the sky. WHAT A SCENE !! The composition, the scene, the tree, the red wall across the big canyon on the other side of the road I had just come in on and the little trail coming toward me couldn't have been better if I had laid it all out myself. As I started to walk back toward the tree I suddenly realized there was a small shadow creeping from right to left across the very top of the tree. Oh my gosh !! I'm loosing the light ! It was clear the sun was quickly moving past the mid canyon point and beginning to play its shadow on the top of the tree and it wouldn't take long before at least half if not all the tree would be in complete shadow. It was real clear that if I was going to get this shot I was going to have to MOVE !!.

I ran out of the slot, across the creek bed, up the draw and to the motor home where I quickly grabbed my camera backpack, Pelican case and tripod. And charged off to try to beat the sun. Down the bank, across the creek and into the slot. Up with the tripod, out with the camera, hook up all the needed this and that and started shooting. I shot, with two cameras, a digital DSLR and my Seitz Roundshot panorama film camera. Admittedly, I saved the film shoot for last and concentrated on getting the tree with as much light as possible on the leaves.

Now for some of the technical stuff........Like, how do I expose for this? I knew I wasn't going to have time to set up for a braked shot so I took a very quick spot meter reading of the brightest leaves at the top of the tree and a second reading of the trees trunk. I shot one quick test image and took a close look at my histogram to see how close my exposure was? I made a quick shutter speed adjustment to move the brightest highlight just a little closer to the right wall of my histogram. Then I checked again where my black point was falling on the histogram and started blasting away. Once I had my exposure where I wanted it then it was all about adjusting for different focal lengths lens settings and changes in the compositional components within the scene. When it was all done I had about 60 frames in the can and felt like I had just run a marathon. I had shot three rolls of 120 slide film, with the Roundshot plus all the digital images.

By this time the shadow had wiped out over half the tree and it was very quickly slipping into the dark recesses of the slot where it lived. I packed up my gear and headed out to shoot more images in the main canyon not knowing I had just missed one of the most important components of really doing a good job in making sure I had truly captured the essence of the old tree and its surroundings.

*( A QUICK TECHNICAL NOTE regarding the importance of knowing how to use the HISTOGRAM on your camera and how to apply that knowledge to capture all the detail required for a full range image. A photographer that might not have known how to use his/her histogram would likely have pointed their camera at this scene and let the "AUTO" feature manage the capture for them. It's a safe bet that the camera would have done its best to make an exposure for the deep shadows in the slot and the rock walls within the slot canyon. That auto setting would have resulted in the tonal values of the leaves on the tree being blown out. *(blown out from the perspective that the histogram curve would have been stacked up against the right wall of the histogram box, while the blacks, or dark values, on the left would have emerged from the bottom of the histogram box to the right of the left wall, thereby providing ample information in the darker or darkest shadow areas of the scene.............BUT ! AT THE EXPENSE OF THE HIGHLIGHTS on the right side of the histogram box.

Since the subject matter, or (COI) center of interest of the image, at least for me, was the leaves! Then I have to have every bit of information captured on my data card which means the right side, or highlight side of the histogram cannot have any part of the exposure curve touching the right vertical wall of the histogram box.

Since I was trying to shoot this image in a single, RAW, frame then the trade off for me was to let the darker areas go completely black. I didn't worry about trying to save any of that area.........I wanted to preserve the highlights in the COI. That meant that a portion of my image was simply going to be very underexposed and that was OK with me.

Now for the non technical piece I mentioned in the beginning of the caption. I was is such a hurry to "get the shot" that my memory of the shoot and that specific experience was and is a big blur. I know I shot a lot, I was thankful I was intimately familiar with my equipment and working with it, so much so that everything just seemed to come automatically. For that part I feel pretty good about the shoot, the image and out outcome.

But, here's the thing. I don't remember ever seeing the Indian looking out from the left wall in the slot !!

Later that day, when we made camp and it was time to download the days shoot I was putting images in their respective folders on my lap top and taking a quick look to see how the day had gone. When I took a quick look at the images from Long Canyon it was like a slap in the face! I remember saying to the other guys I was with...."Hey, look at this! I didn't see this when I was in the slot. Everyone instantly recognized it for exactly what it looks like, up to and including the feather sticking out of the wall just above the head of the Indian. It was an eerie feeling to see something so profound to not have noticed it when I was shooting the scene. I have asked myself a million times why I didn't see him?? To the point that I actually started to think. What if I go back there sometime and it simply doesn't exist? What then?

Well, last year I had the opportunity to take my wife to experience the Burr Trail. I very purposely stopped at the Long Canyon Slot and took the hike into the little slot to look for my Indian friend. He was there, but it took some work to figure out where he looked like my captured image.

The lesson I came away with on this journey was an old axiom I had learned way back in my college days and that was to SLOW DOWN and take the time to really SEE...........and not just look. Obviously I did a great job of looking.........not so good at seeing that day in November sometime ago. It's a lesson we could all do better at, with just a little effort...............Vern
© Vern Bartley Photography
User Agreement
Cancel
Continue